Recently I was sharing my thoughts on 'why saved people do stupid, unGodly things'.   My answer was that if we could get hold of the knowledge that we are a child of the King, we are princes and princesses, we may be able to curb some of the stupid things we do.  A friend of mine sent me this story.
I thought I would share it:

A seminary professor was vacationing with his wife in Gatlinburg,TN. One morning,they were eating breakfast at a little restaurant,hoping to enjoy a quiet,family meal. While they were waiting for their food, they noticed a distinguished looking, white-haired man moving from table to table, visiting with the guests. The professor leaned over and whispered to his wife, 'I hope he doesn't come over here.' But sure enough, the man did come over to their table.  'Where are you folks from?' he asked in a friendly voice.' Oklahoma,' they answered.  'Great to have you here in Tennessee,' the stranger said.'What do you do for a living?' 'I teach at a seminary,' he replied.  'Oh, so you teach preachers how to preach, do you? Well, I've got a really great story for you.' And with that, the gentleman pulled up a chair and sat down at the table with the couple.

The professor groaned and thought to himself, 'Great .. Just what I need ....another preacher story!'

The man started, 'See that mountain over there? (pointing out the restaurant window). Not far from the base of that mountain, there was a boy born to an unwed mother. He had a hard time growing up, because every place he went, he was always asked the same question, 'Hey boy, Who's your daddy?' Whether he was at school, in the grocery store or drug store, people would ask the same question, 'Who's your daddy?'


He would hide at recess and lunch time from other students. He would avoid going in to stores because that question hurt him so bad. 'When he was about 12 years old, a new preacher came to his church. He would always go in late and slip out early to avoid hearing the question, 'Who's your daddy?'


But one day, the new preacher said the benediction so fast that he got caught and had to walk out with the crowd.  Just about the time he got to the back door, the new preacher, not knowing anything about him, put his hand on his shoulder and asked him, 'Son, who's your daddy?'


The whole church got deathly quiet. He could feel every eye in the church looking at him. Now everyone would finally know the answer to the question, 'Who's your daddy?'   'This new preacher, though, sensed the situation around him and using discernment that only the Holy Spirit could give, said the following to that scared little boy.... 'Wait a minute! I know who you are! I see the family resemblance now, You are a child of God.' With that he patted the boy on his shoulder and said, 'Boy, you've got a great inheritance. Go and
claim it.'


'With that, the boy smiled for the first time in a long time and walked out the door a changed person.. He was never the same again. Whenever anybody asked him, 'Who's your Daddy?' he'd just tell them , 'I'm a Child of God..''

The distinguished gentleman got up from the table and said, 'Isn't that a great story?' The professor responded that it really was a great story!


As the man turned to leave, he said, 'You know, if that new preacher hadn't told me that I was one of God's children, I probably never would have amounted to anything!' And he walked away.

The seminary professor and his wife were stunned He called the waitress over & asked her, 'Do you know who that man was -- the one who just left that was sitting at our table?'


The waitress grinned and said, 'Of course. Everybody here knows him. That's Ben Hooper. He's governor of Tennessee.' 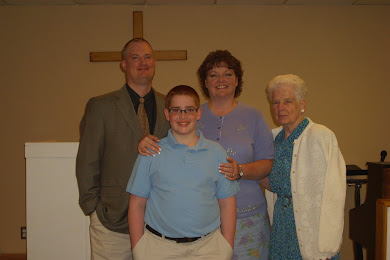 James, Seth, Me and My Mom

Hello from the Morris Family!

We moved to Nebraska in May, 2005 for my husbands job at Union Pacific. We are positive the Lord moved us here and we love Nebraska!! My Mom moved in with us in August, 2006.

We picked a family verse many years ago. You will see it below. As a family we want to live a Godly life and we try to glorify God. It's a daily battle. But, our God is faithful to forgive us daily. I'm very thankful for a God who allowed His Son to die for MY sins. I'm very thankful that I heard and accepted that Truth in my heart and can say I have a home in Heaven for eternity. I'm glad that I don't have to 'do' anything else for His Salvation but accept what Christ did for me by dying for my sins. What I 'do' now is because I love Him, not because I'm trying to earn my way to Heaven.

Romans 10:9,10,13 says, “That if thou shalt confess with thy mouth the Lord Jesus, and shalt believe in thine heart that God hath raised Him from the dead, thou shalt be saved. For with the heart man believeth unto righteousness, and with the mouth confession is made unto salvation… For whosoever shall call upon the name of the Lord shall be saved.”

If you want to know how YOU can also be sure you are going to Heaven, just email me (justdeanna23@gmail.com) I would love to share it with you straight from the Bible.

"I beseech you therefore, brethren, by the mercies of God, that ye present your bodies a living sacrifice, holy, acceptable unto God, which is your reasonable service. And be not conformed to this world: but be ye transformed by the renewing of your mind, that ye may prove what is that good, and acceptable, and perfect, will of God." Romans 12:1,2

Dreaming of our next vacation!

The Outer Banks of NC!

Glad you came to visit! I would love to have you sign up as a follower!